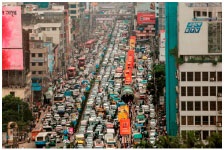 Sampling Procedure
Under the overall census plan, a Census Advisory Committee (consisting of representatives from all the Ministries, Divisions, Universities and other Government and Non-Government Research Organisations ) was formed to solicit their views as users on July 20,, 1972. The Committee was charged with the task of advising the Census Commission on the methodology of taking the census, drafting forms/questionnaires, the tabulation plan, processing of census data, etc. The 1971 plan for the population census prepared in the pre-liberation period was submitted for consideration to the newly constituted Census Advisory Committee. According to this plan, information on only eight population characteristics were to be collected in the "Big Count" of population. Other items including housing, social, economic and demographic characteristics of the population were to be collected in a nationwide sample survey to be conducted immediately after the population count. The Census Advisory Committee, having considered the various developmental needs of the new nation, advised the Census Commission to conduct the following censuses:
(a) the census of housing,
(b) the census of establishments, and
(c) the census of population.
The Census Commission, however, had to undertake one more census, namely, the Census of Handloom Industries in July 1973 under the directives of the Government. The methodology of taking the above mentioned censuses, the items to be enumerated, the tabulation plan and the data processing methods were all detailed by the Census Advisory Committee. The census schedule and questionnaire form appendices 1 & 2. Compared to the topics included in the 1961 census, the new topics covered in the 1974 census were - "duration of residence at place of enumeration" and "place of last residence". The topic on "school attendance", included in the 1961 census was dropped from the census schedule of 1974.
Response Rate
A sample of 0.5 % of the census blocks was selected systematically from each of the 66 census districts. A total of 482 census blocks were thus selected.
The re-enumeration operation was conducted in all the 482 blocks. The other two operations ran into difficulties. Census records could be found for only 119 out of the 482 sample blocks. These 119 blocks, however, did not represent all the 66 census districts. Population enumeration records could not be obtained for 14 census districts. A decision was taken to match data for one sample block representing rural areas from each of 48 census districts for which enumeration records were available. For the urban areas census data for 11 sample blocks from the 4 major cities of Dacca, Chittagong, Khulna and Narayanganj were available. The data were matched. The field reconciliation was done in the 59 'matched' sample blocks, viz. 48 rural and 11 urban sample blocks. The under-estimation involved in the enumerated population total for the 4 major cities was 19.3 % and 6.5°/ for the rest of the country. The estimated population ofBangladesh on March 1, 1974 was readjusted to 76.398 millions.
Due to the small number of blocks matched, the results of the PEC remain of limited value.

Cleaning Operations
Computerised data processing has beenresorted for the 1974 census. A 100% tabulation of both rural and urban data had been envisaged in the master-plan. On account of delays in the arrival of the "encoding machines", a decision was taken to provide sample tabulations of the census data. Due to administrative and logistic difficulties, several census slips were lost or misplaced. Sampling has thus been done on "available slips" and consequently an unknown bias has been introduced into the results.
Processing of the data for computer tabulation involved data transfer or key punching of the coded data from census slips on to machine readable magnetic tapes and subsequent editing and cleaning the tapes. As key punching was done manually major portion of the tabulation time was taken up by key punching operation. Adoption of COCENTS package programme helped and speeded up tabulation. Preliminary tabulations for the whole country were thus available for all the tables by the end of May 1976.

Disclaimer
The user of the data acknowledges that the original collector of the data, the authorized distributor of the data, and the relevant funding agency bear no responsibility for use of the data or for interpretations or inferences based upon such uses.