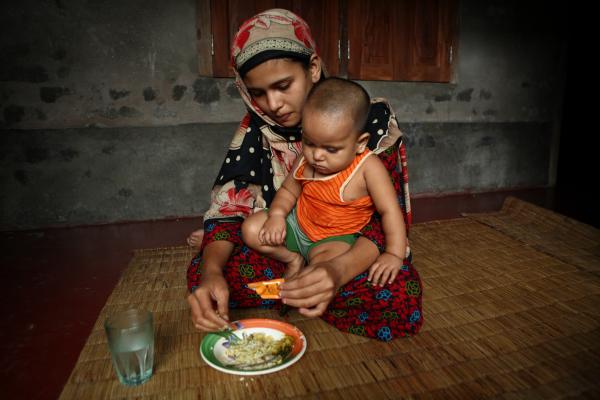 Geographic Coverage
Of the 55,120 households selected for the sample, 52,711 were found to be occupied. Of these, 51,895 were successfully interviewed for a household response rate of 98.5 per cent.
In the interviewed households, 59,599 women (age 15-49 years) were identified. Of these, 51,791 were successfully interviewed, yielding a response rate of 86.9 per cent within interviewed households.
There were 23,402 children under age five listed in the household questionnaires. Questionnaires were completed for 20,903 of these children, which corresponds to a response rate of 89.3 per cent within interviewed households.
Overall response rates for households, women’s questionnaire, and overall response rate for under-5 questionnaire are calculated for the individual interviews of women, and under-5s, respectively (Table HH.1).
Overall response rates 85.6 and 87.9 per cent are calculated for the individual interviews of women and under-5s, respectively (Table HH.1)
The household response rates were similar across divisions and areas of residence. The response rates of women and children under 5 were also in the same situation, with the exception of Sylhet where the women’s response rate was 83.8 per cent. Low response of Sylhet for women could be due to the regions’ known conservative social norms in practice, although this is not confirmed by any indicator. The results for Sylhet should be interpreted with some caution, as the response rate is low.
Universe
The weighted age and sex distribution of survey population is provided in Table HH.2. The distribution is also used to produce the population pyramid in Figure HH.1. In the 51,895 households successfully interviewed in the survey, 237,396 household members were listed. Of these, 119,684 were males, and 117,712 were females.
Table HH.2 shows the age-sex structure of the household population. The proportions of child, working and old-age groups (0–14, 15–64 and 65 years and over) in the household population of the sample were 33.2, 61.3 and 5.5 per cent, respectively. In MICS 2006, these figures were 35.5, 59.8 and 4.7 per cent, higher in younger age and lower in older age. More significantly, the proportion of children aged 0-4 is 9.9 per cent in this survey as compared to 11.6 per cent in MICS 2006, indicating a drop of birth rate in recent years. Birth rate decrease is a trend that MICS 2006 had already identified after comparison with the census 2001.
The surveyed population indicates a sex ratio of 102, unchanged from that of MICS 2006. The dependency ratio was 63.2 per cent, much reduced from 67.2 per cent of MICS 2006. Similarly, the proportion of children aged 0-17 has also reduced from 42.3 per cent in MICS 2006 to 39.0 per cent in this survey. The total number of the children aged 0-17 is 92,546.
Tables HH.3, HH.4 and HH.5 provide basic information on the households, female respondents age 15-49 and children under-5. Both unweighted and weighted numbers are presented. Such information is essential for the interpretation of findings presented later in the report and provides background information on the representativeness of the survey sample. The remaining tables in this report are presented only with weighted numbers.
Table HH.3 provides basic background information on the households, including the sex of the household head, division, area, number of household members and education of head of the household head are shown in the table. These background characteristics are used in subsequent tables in this report; the figures in the table are also intended to show the numbers of observations by major categories of analysis in the report.

Sampling Procedure
The sample for the Bangladesh Multiple Indicator Cluster Survey (MICS) was designed to provide estimates for a large number of indicators on the situation of children and women at the national level, for urban and rural areas, seven divisions and sixty four districts. The districts were identified as the main sampling strata and the sample was selected in two stages. Within each stratum, a specified number of census enumeration areas were selected systematically with probability proportional to size (pps). After a household listing was carried out within the selected enumeration areas, a systematic sample of 20 households was drawn in each sample enumeration area. Four (04) of the selected enumeration areas were not visited because they were inaccessible due to rough weather and hilly remote road communication during the fieldwork period. These enumeration areas were one each from Bagerhat, Gaibandha, Rangamati and Sirajganj districts. The sample was stratified by districts, and is not self-weighting. For reporting national level results, sample weights are used. A more detailed description of the sample design can be found in Appendix A, Sample design.
Readers may note that we have included maps showing the districts for some of the indicators with different colours being used to represent different ranges of values. The reader should treat interpretation of these maps with some caution, because the associated sampling errors at the district level would be larger than those at the division level.
Map HH.1 shows the number of enumeration areas under the districts visited during the survey with division boundaries. It is to be noted that a new Rangpur division has been created in 2010 comprising eight districts from formerly Rajshahi division.

Cleaning Operations
Data were entered using the CSPro software. The data were entered on 30 microcomputers and carried out by 30 data entry operators and 1 data entry supervisors. In order to ensure quality control, all questionnaires were double entered and internal consistency checks were performed. Procedures and standard programs developed under the global MICS5 programme and adapted to the Bangladesh questionnaire were used throughout. Data processing began simultaneously with data collection in December, 2012 and was completed in May, 2013. Data were analysed using the Statistical Package for Social Sciences (SPSS) software program, Version 18, and the model syntax and tabulation plans developed by UNICEF were used for this purpose.