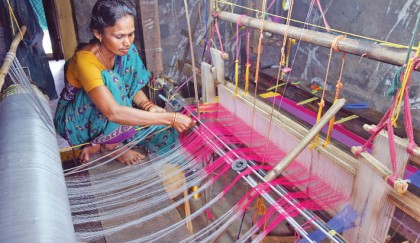 idno
BGD-BBS-BHC-2018-v01
Title
Handloom Census 2018
Subtitle
3rd series
Country
Abstract
Once upon a time handloom was the largest employment and income generating sector after agriculture in rural economy. It has a magnificent past due to excellence and high demand of its products in Indian sub-continent and in Europe as well. Famous Muslin, Jamdani, Benarashi etc. are the renowned products of handloom. Remarkably, industrial revolution and invention of modern technologies have changed the scenario gradually.
However, Handloom Census is the full-fledged enumeration of all the units those are engaged in weaving and allied activities for commercial purpose or own use. The units include household as well as factory/industry based weaving activities. Bangladesh Bureau of Statistics (BBS) had conducted the first nationwide Handloom Census in 1990 where total 2,12,421 units were found. Subsequently, the second Handloom Census was conducted by BBS in 2003 where 1,83,512 units were observed in 63 Districts except in Bagerhat where no existence of handloom units were found. Afterwards, BBS has conducted the third nationwide Handloom Census during 10-14 May 2018 in view of the Demi-Official letter from Ministry of Textiles and Jute to the Statistics and Informatics Division (SID), Ministry of Planning. The census activities have been operating since November 2017 through a GOB funded project called ‘Handloom Census Project 2017, BBS’. As there were no updated census, survey or any other comprehensive study on handloom sector since long, BBS, initially collected primary information on handloom during January to March 2018 through Divisional, District and Upazila Statistics offices for better preparation of the zonal operation.
The primary information was pretty helpful for allocating resources efficiently in the zonal operation that was conducted in 01-04 April 2018. Approximately 260 Zonal Officers, 70 UCCs, 64 DCCs and 08 Divisional Coordinators were engaged from BBS officials during the zonal operation. Besides, high level of supervising team from SID and BBS including the Secretary, SID and DG, BBS were vigilant for ensuring the quality of zonal operation. The zonal operation depicts that there is no existence of handloom units in Lakshmipur, Chandpur, Bhola and Bagerhat districts.
However, based on the zonal operation, approximately 3000 Enumerators, 600 Supervisors, 257 Zonal Officers, 70 UCCs, 58 DCCs and 08 Divisional Coordinators from BBS have been deployed in main census during 10-14 May 2018. In addition to that supervising and monitoring team from BBS and SID were in the field in 60 districts during the census period. Moreover, a control room at Handloom Census Project office, Dhaka provided all out support for mitigating the emergency demands of the field staffs immediately. Finally, after completion of the countrywide main census all DCC submitted their census kits including filled in questionnaires and various forms to the Project Office, Dhaka within 20 May 2018. After having the main census books, the handloom census project management engaged 40 experienced editors from various wing of BBS to edit the filled in questionnaire of the census books. Initially, the project management emphasized on Tally Sheet of each books to prepare the preliminary results of the census. Later on, all the edited Tally Sheets were captured in computer manually by expert Data Entry Operators (DEO) of BBS through using Oracle & Web-based data entry software.
In fine, the Handloom Census 2018 Preliminary result reveals that the total 1,16,006 units have been observed at the time of census enumeration which is approximately 36.79% lower than that of 2003 and 45.39% lower than the figure of the Handloom Census 1990. Moreover, it is also observed that Total Persons Engaged (TPE) have also been decreasing tendency in handloom since last twenty-eight years (1990-2018). However, it is evident from the last three Handloom Census findings (1990, 2003 and 2018) that Handloom Sector has been following a sharp declining trend over the years. In conclusion, Ministry of Textiles and Jute through BHB may provide necessary support to revive the famous handloom sector once again by taking proper development initiatives and identifying the real weavers and allied workers as well.
The main objective of the census is to explore the statistical picture of the handlooms by visiting physically each of the handloom unit throughout the country.
The other objectives are:
• To prepare a complete frame for future sample survey by BBS and other relevant organizations;
• To know the picture of the existing Handlooms in Bangladesh;
• To know the number of existing power looms in the same premise of the handloom unit.
Kind of Data
Census/enumeration data [cen]
Unit of Analysis
• To know the exact no. of active and idle looms in handloom sector;
• To know the distribution of the exact no. of the person engaged (Male & Female) in this sector including the weavers and the allied workers;
• To estimate the annual production and the expected amount of raw materials required annually in the handloom sector;
• To estimate the contribution of the handloom sector in the GDP partially; and
• To explore the socio-economic condition of the weavers and the allied workers who are working in the handloom sector.

Geographic Coverage
Mapping and updating the geo-codes are very important tasks for any successful census operation. Basically the enumeration areas in the handloom census 2018 were not similar to population census 2011. The zonal officers tried their best to draw the census area maps though it was very difficult to sketch the map due to scatteredness of the handloom units throughout the country. However, geo-codes were seriously verified and corrected by the zonal officers which is very important and sensitive to handle any census data.
Unit of Analysis
• To know the exact no. of active and idle looms in handloom sector;
• To know the distribution of the exact no. of the person engaged (Male & Female) in this sector including the weavers and the allied workers;
• To estimate the annual production and the expected amount of raw materials required annually in the handloom sector;
• To estimate the contribution of the handloom sector in the GDP partially; and
• To explore the socio-economic condition of the weavers and the allied workers who are working in the handloom sector.

Cleaning Operations
Training and data collection are two main features for ensuring a quality census. Comprehensive training was given to the census personnel which made them efficient. The whole country was divided into 64 Census Districts during zonal operation on 1-4 April 2018. The census districts were segmented to ensure intensive supervision and monitoring in order to ensure quality data. The 64 census districts were divided into 260 zones on the basis of the primary data collection.